I’m posting a review request for the Resilience Project Study, which is applying for project approval on Open Humans. This project is part of an IRB-approved study led by Jason Bobe at the Icahn School of Medicine at Mount Sinai, and we’ve received documentation of this IRB approval.

The project would like to launch their app in the Apple app store and would like a quick review turnaround, if possible.

Should this project be visible and available for all Open Humans members to join?

Is the documentation of the IRB approval something that can be shared on the project page? (I recall that there are factors that sometimes make sharing anything related to the actual IRB documents tricky…)

It sounds like a nice feature to add “uploaded copy of IRB approval” as an optional feature for projects! Maybe it could be part of a more general desire for projects sharing some associated files (e.g. some aggregate data sets individual data could be compared against).

Maybe I could post the document here, or a screenshot image, I should doublecheck with Jason if that’s OK.

It would also be nice to know what people will see on the project’s main website once it’s live. A screenshot would be enough to get a feel for that.

@beau Here is the most recent approval letter from the IRB.

there is a companion website for the project and the studies that are related to it, but it is behind a firewall until launch. FWIW Open Humans does not appear on the website.

Its embedded in one rather narrow aspect of one channel, so I think it makes sense from a design perspective (“progressive disclosure” is a general principle we’re using) to surface the connection in that context. Initially, Open Humans is being used in 1 narrow capacity:

Hope that helps, thanks!

@gedankenstuecke here is the “connections” area of the iOS app showing the connection to OH, that will take user through the oauth process. 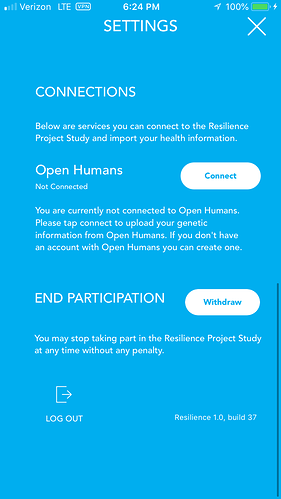 That looks good to me,

for approving this project!

I also vote for approval. I think the presence of IRB oversight is a fair proxy. (Albeit imperfect! But projects can always have new reviews initiated, if a concern is ever raised.)

Thank you @gedankenstuecke & @beau! I added a note to an existing GitHub issue that IRB approvals are a type of project-associated file that might be useful to support in the site.

And, in the interests of enabling the app to be released in the app store, I’ll consider this approved.