In this post I’ll share some tips that I learned from supporting hundreds of students who followed a course on Quantified Self. (I was co-founding director of Quantified Self Institute in the Netherlands from 2013-2017.) Self-tracking becomes more satisfying if you know what you’re doing.

Just like many narratives in our life, a self tracking project has a beginning, a middle part and an ending. Let’s start with the beginning: your motive. There are many different motives to start self-tracking. The most common are curiosity, the desire to solve a problem or the wish to (self) improve. Curiosity is great, it brings you to new places and is probably the best motive to learn new things. There is one downside to having curiosity being your engine in a self-tracking project. Once the thrill of doing something new has worn off, there is a pretty big chance of you quitting you project. That is a shame, because most of the learning from a self-tracking project is not in the beginning, but at the end. Cultivating your curiosity by making the self-tracking a deliberate act of collecting observations to answer a personal question has proved to be useful for many of my former students. Formulating a question as a starting point can be hard, but it really pays off.

I’ve see many students who started collecting a lot of data. After a while you start wondering why you are collecting all this information. Do you really need to spend that much time collecting data? Just look at your question, and then you know it.

Starting with a clear question is not only useful if you are curious, but also useful if you desire to understand a problem or if you wish to manifest some kind of improvement. It is very human-like to wander off and do more than you initially intended to. Go back to your question and keep it simple is my advice. Just collect the data you need to answer your question.

How to formulate a question for self-tracking? There is no golden rule, but here are five tips that I use as a rule of thumb. Keep it: 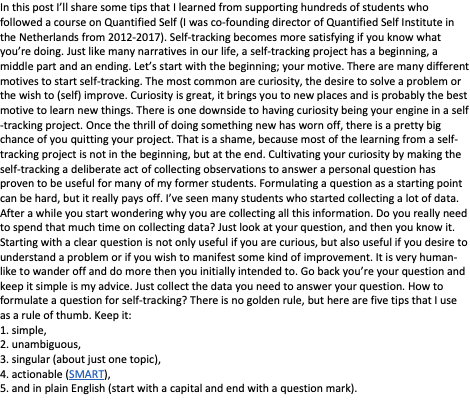